In Part Two, the king of Ponnivala and his courageous queen are blessed with the birth of three magical children: the twin heroes Ponnar and Shankar, plus a chaste and clairvoyant sister Tangal. But unbeknownst to them, a murderous plot by their rival clansmen causes Lord Vishnu to persuade his sister, the family goddess Celatta, to spirit the two boys into hiding. With no male heirs, the king and queen are sent into exile for a second time.

Five years later, Celatta reveals the two sons to the king and queen, and the family returns to their beloved lands. When the boys come of age and their parents pass away, they become the new hero-kings of Ponnivala. Seeking to right the wrongs of the past, and to glorify their heritage via heroic deeds, the brave boys seek out adventure, avenging their forebears and winning family independence from the Chola overlord.

But this rule is interrupted when the twins’ younger sister requests a special gift-a gift which raises the ire of the neighbouring hunters, and brings them into direct confrontation with the promised agent of their destruction: the giant boar Komban. Claiming victory over Komban, however, only serves to expand the war with the hunters, until the twin kings, their sister, and their loyal servant meet the fate ordained by Lord Shiva at their creation.

Use this menu to explore Series 2: 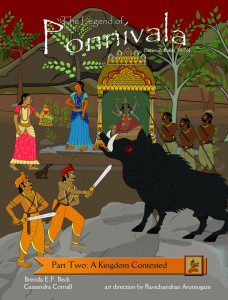 A scheming midwife tries to kill the Queen’s two newborn sons. A goddess rescues them. A third baby, a girl, is cared for in the palace.

The family’s clansmen attack the Ponnivala palace and send the King, Queen, and baby girl into exile. They flee to a forest area ruled by hill tribesmen.

The Ponnivala family are reunited with their sons Ponnar and Shankar and return to their former palace. The boys learn horsemanship and dicing. They grow up to age 15.

The two sons get married, but lock up their brides forever. Their sister Tangal lives with them.

The two young rulers beat their clansmen for past wrongs and exile them. These men complain to the Chola King. He demands tribute from Ponnivala.

Only one brother takes tribute to the Chola. He is jailed. The second brother arrives. Together they kill the monarch and Ponnivala’s independence is won.

Tangal requests a pet parrot for company. Her brothers agree and prepare the nets needed for the hunt. The girl then changes her mind due to a vision.

There is a parrot hunt, complete with a tiger and cobra fight. The brothers capture one parrot but its male companion complains to the Forest Princess.

An artisan tricks one brother but eventually is killed. His hunter friends try to take revenge. The two brothers win a pitched battle and reach home safely.

A wild boar goes on a rampage and uproots rice paddies. He challenges the two Ponnivala Kings. A war drum is raised and readied for battle.

Tangal asks for signs as her brothers leave for the boar hunt. Her pet dog, left behind, curses the Ponnivala Kings. They lie sick in their war tent.

In Episode 25: The warrior brothers apologize and the curse is lifted. Komban the Boar is killed. Lord Vishnu now sides with the hunters. The brothers gift their lives to Lord Shiva.

Seeing signs, Tangal knows her brothers are dead. She burns the palace, finds and revives her brothers, has pavilions built, and all rise to Heaven.