The Legend of Ponnivala print editions are available for purchase online. These colourful, high-quality graphic novels are printed in the US and can be shipped internationally via each book’s web store. Our print editions are priced at $9.99 US. Individual retailers may discount this price or offer other buying incentives. In Part One, the goddess Parvati creates nine farmer-brothers to cultivate the land. During a severe drought, the brothers and their wives are forced to seek the aid of the Chola King, who grants them land in Ponnivala. The eldest accidentally kills a herd of sacred cows, and his family and land are cursed by Lord Shiva to suffer seven generations of barrenness. The old farmer and his wife are granted a magical baby as relief from this terrible curse, but they die when the boy is just five years old. Orphaned and homeless, he finds refuge as a servant in the home of a wealthy farming family. Only when this boy has grown does Lord Vishnu reveal to him that the young sister of his masters is his rightful bride, and that he is the kingdom of Ponnivala’s true heir. When the kingdom has been reclaimed, the new king and his wise wife undertake a decades-long journey to the Council Chamber of Lord Shiva. They plan to beg his pardon and lift the family curse. This wish is granted, but along the way a new threat to the family and kingdom is revealed. Several seeds of destruction have been planted that will threaten the very existence of the beautiful land of Ponnivala in the next generation.

Use this menu to explore Series 1: 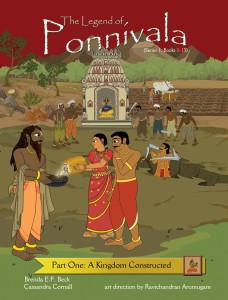 Episode 1: In the Beginning

The Goddess Parvati creates nine farmer-brothers. A Chola king gives them land in Ponnivala. Lord Shiva curses the eldest due to the death of some cows.

To lessen the impact of his curse, Lord Shiva hides a baby under some stones. Found, the boy is loved. The couple die and the young boy is orphaned.

The orphan is treated badly by clansmen and runs from place to place. He is mistreated by many but summons his courage. He is a survivor.

Finally the orphan boy is adopted by a rich farmer where he works as a shepherd. He grows up, then falls in love with the little sister of his masters.

Lord Vishnu tells the shepherd orphan he is eligible to marry the girl he loves. They marry but her family banishes them. They leave for ancestral Ponnivala.

The young couple reclaim one field from their rival clansmen who try to undercut them by giving them roasted seeds to sow. Lord Vishnu helps them out.

The roasted seeds grow, but there are more tricks. When jewels replace the maize grains, the Queen gives this new wealth to beggars. Lord Vishnu replenishes it.

The King and Queen rebuild their palace. At the celebration the Chola monarch gives them honours. But the Queen is barren, and worried about the future.

The Queen wants to visit her brothers. Against her husband’s advice she goes, and is not well received. In revenge she curses their family.

Episode 10: The Pillar of Destruction

The couple narrowly escape a death plot by crafty artisans and clansmen. The Queen is still barren. Lord Vishnu promises her children in return for many good deeds.

Episode 12: The Gates of Heaven

The King and Queen undertake a long pilgrimage and meet with many adventures. The King has to stop. The Queen reaches heaven’s gate alone.

Episode 13: The Book of Fate

The Queen undergoes a long penance. Lord Shiva has her die seven times, then places three magical children in her womb. The couple returns home.